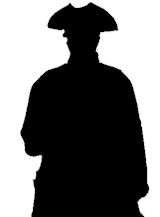 Joel Viles served as a corporal in Captain John Parker’s Lexington militia company and was on the Common during the morning engagement of April 19, 1775. Subsequently, he was a member of a detachment commanded by Captain Parker that was called to duty in Cambridge by the Committee of Safety from May 6 to 10, 1775, serving as a sergeant. On June 17 and 18, 1775 he was again on duty in Cambridge under the command of Captain Parker, this time serving as a corporal.  Then, from March 4 - 8 he was on service in Roxbury, MA as a private in Captain John Bridge’s company.1

Corporal Joel was born in Waltham on December 14, 1743 and was thus thirty-two when he stood in the ranks of Captain Parker’s company on the Common. He had moved at some time from Waltham to Lexington where he then settled. Joel was unmarried on April 19, 1775, but just a little over two months later on June 27, 1775 he married Mary Bowman (born in Lexington February 28, 1754; died Lexington January 16, 1833) daughter of William and Mary (Reed) Bowman, and thus Joel was the nephew of Captain Thaddeus Bowman whose biography appears on this site. Perhaps as a married man now and soon to be a father, Joel’s military service would be limited to the few entries given above. He had been chosen as the town’s Hog Reeve in 1771, an office that sounds archaic today but was one that served an important function in 18th century Lexington. Hogs were supposed to be kept penned, but some managed to escape or in some cases farmers allowed them to roam in search of food with the result that the animals frequently caused a great deal of damage to neighbors’ crops. In such cases, the hog reeve was charged with capturing and penning the offending animal (each town usually had a hog pen) and the owner was then liable for damages the hog had caused and for the fee due the reeve. 5

In 1778, Joel was chosen as one of three delegates to a convention charged with attempting to fix a system of prices for “goods, wears and merchandise” because of the desperate shortage of money in Massachusetts and the inability of people to cope with “the high price of all the necessaries of life and the ruinous state of the currency.”6 He also served as selectman in 1791.7 Joel died January 5, 1817, and unfortunately his gravesite has not yet been located.

Joel and Mary had ten children, all born in Lexington8, not an unusual number of offspring in those days.

1 Massachusetts Office of the Secretary of State, Massachusetts Soldiers and Sailors of the Revolutionary War, A Compilation from the Archives, Seventeen volumes, Wright and Potter Printing Company, Boston, 1896, vol. 16, p. 328.

2David Jillson, in his article, John Viall of Swansea, Mass. And Some of His Descendants, Narraganset Historical Register, 1897, has him born in 1619 and originating from Twickenham, Middlesex County, England. According to Jillson, John owned and operated the Ship Tavern in Boston from 1662 to 1679 when he removed to Swansea. The property was then willed to his son, John.