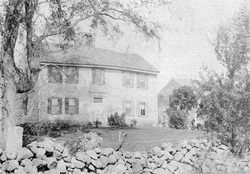 Ebenezer Bowman, the subject of this biography, was a descendant of Nathaniel Bowman the first of that family to come to America. Nathaniel was born in England, but where is a matter of disagreement, either in Leek, Staffordshire or Kirk-Oswald, Cumberland. He and his wife Anna are listed among those who arrived in the Winthrop Fleet in 1630. They settled in Watertown, MA, where Nathaniel is listed as one of the founders of that town. They removed to Cambridge Farms (later Lexington) MA in 1649 where Nathaniel died on January 21, 1662. Anna probably predeceased her husband since she is not mentioned in his will. Nathaniel and Anna’s son Francis was born in 1630 and died in Cambridge Farms December 16, 1687 at the age of 57. Francis married Martha Sherman the daughter of Captain John and Martha Palmer Sherman on September 26, 1661. They had ten children and the sixth child, Joseph, was born May 18, 1674.1 The Bowman home was located near today’s Watertown Street in Lexington, near the Arlington and Belmont border close to the current Bowman Park. [See photo below.]

Joseph served as Town Clerk of Lexington, Assessor, Justice if the Peace, as selectmen for fifteen years and Representative to the General Assembly for six years. He married Phoebe Barnard, born at Watertown, MA on August 8, 1673 the daughter of John and Sarah Flemming Barnard. Joseph died at Lexington April 8, 1762 and Phoebe on December 20, 1751 age 78. Joseph and Phoebe had eight children the last of whom was Thaddeus, born September 2, 1712 and the subject of a biography on this site. Thaddeus, known more popularly as captain Thaddeus, married twice. His second wife was Sybil Roper Woolson and their second son was Ebenezer born on July 31, 1757.2

Ebenezer was only seventeen when he stood on Lexington Common on April 19, 1775. He was not the youngest, however, as there were seven other seventeen year olds, four age sixteen and one fifteen.

Just a few days later, Ebenezer joined with thirteen others who were on the Common to swear a deposition as to what had occurred there.

We, Nathaniel Parkhurst, Jonas Parker, John Munroe, Jun., John Winship, Solomon Peirce, John Muzzy, Abner Mead, John Bridge, Junior, Ebenezer Bowman, William Munroe 3d, Micah Hagar, Samuel Sanderson, Samuel Hastings, and James Brown, of Lexington, in the County of Middlesex, and Colony of Massachusetts Bay, in New-England, and all of lawful age, do testify and say, that on the morning of the nineteenth of April instant, about one or two o' clock, being informed that a number of Regular Officers had been riding up and down the road, the evening and night preceding, and that some of the inhabitants as they were passing had been insulted by the officers, and stopped by them; and being also informed that the Regular Troops were on their march from Boston, in order as it was said, to take the Colony Stores then deposited at Concord, we met on the parade of our Company in this Town; and after the Company had collected we were ordered by Captain John Parker, who commanded us, to disperse for the present, and to be ready to attend the beat of the drum; and accordingly the Company went into houses near the place of parade. We further testify and say, that about five o' clock in the morning, we attended the beat of our drum, and were formed on the parade. We were faced towards the Regulars, then marching up to us, and some of our Company were coming to the parade with their backs towards the Troops, and others on the parade began to disperse, when the Regulars fired on the Company before a gun was fired by any of our Company on them; they killed eight of our Company, and wounded several, and continued their fire until we had all made our escape.3

On May 15, 1775, Ebenezer enlisted as a private in Captain Benjamin Locke’s Company of Lieutenant Colonel William Bond’s 37th Massachusetts Regiment. His age was given as eighteen and he was five feet eight inches in height. The regiment participated in the Siege of Boston until it was mustered out in December, 1775. According to Charles Hudson in his History of Lexington, his father Captain Thaddeus Bowman received £5 0s for Ebenezer’s service. Ebenezer was then in  Captain John Bridge’s Company of Colonel Eleazer Brooks’s regiment for five days from March 4 to March 8, 1776 serving in Roxbury, MA. He was also listed as among those who guarded the cannon in Lexington and then transported them to Cambridge sometime in March or April, 1776. He then enlisted in Captain Charles Miles’s Company of Colonel Jonathan Reed’s Regiment for a period of five months from July through December, 1776. The regiment marched to Ticonderoga to support the Northern Army. For this service, Captain Thaddeus received £9 0s for Ebenezer’s tour of duty.4

Ebenezer then entered Harvard College probably in 1778 and graduated in 1782. He first taught school in Cambridge and then studied law and was admitted to the Massachusetts Bar.5 He apparently moved first to New York City and then toward the end of 1785 or in early 1786 he removed to Philadelphia. PA His older brother Samuel was then residing there, but when Samuel decided to move to what is today Wilkes-Barre, Pennsylvania in 1786, Ebenezer either accompanied him or moved there a short time later. Their nephew, Isaac later joined the two brothers there. 6

Samuel was the first son of Captain Thaddeus Bowman and his second wife Sybil.  He had served in the Revolution eventually attaining the rank of lieutenant. He was reportedly on the staff of Alexander Hamilton as an ensign, and was one of the two officers who accompanied Major John Andre to the scaffold. Samuel later wrote an account of Major Andre’s last hours.7

Samuel built his home in what was then known as the village of Wyoming Valley, PA, but has since been incorporated into the city of Wilkes-Barre where the area is still known as Bowman’s hill. Ebenezer lived with Samuel for a while, but as the many children of Samuel and his wife, the former Eleanore Ledlie, began to arrive — they would eventually have nine — Ebenezer obviously would have moved out.8

Ebenezer became the first attorney to be admitted to practice before the Luzerne County courts in 1787. He was described as a prominent and successful member of the Bar and a respected citizen of the county. In May of 1788, he was elected Cornet of a “Troop of Light Dragoons,” and chosen to represent Luzerne County in the state legislature in 1793. He was served as a Burgess of the Borough of Wilkes-Barre from May 1824 to 1827 and served as the President of the Council from May 1809 to 1910 and again from May 1820 to 1823. He died in Wilkes-Barre March 1, 1829 at age 71.10 His gravesite is yet to be located.

According to one source, Ebenezer married Esther Ann Watson, some twenty years his junior, in New York in 1896. Esther was according to this source from Ireland. By 1800 they had two children, Caroline 3 and James 1. On May 30, 1816 Caroline married George Denison born in Kingston, PA February 22, 1790, the third son of Colonel Nathan Denison who signed the papers of capitulation following the Wyoming massacre of July 3, 1778. Caroline and George had three children. Their youngest son, Rev. Henry Mandeville Bowman married Alice the daughter of President John Tyler. Caroline died July 1, 1833 and her husband on August 20, 1832.9

Interestingly there was an item from Ebenezer listed on E-bay. It was described as an “1806 Stampless Letter Cover, Wilkes-Barre, PA.” Unfortunately it had been already purchased and no other information was available. However, there is a letter at the National Archives from Ebenezer to Samuel Hodgdon in Philadelphia dated May 21, 1800. It is described as follows: “Among a discussion of other matters, Bowman comments on the disagreeable intelligence respecting the removal of Colonel Pickering from the office of Secretary of State. He observes that it is impossible for the people at large to understand the reasons for the conduct of the chief magistrate in this matter.”11 At the Manuscripts Division of the William L. Clements Library at the University of Michigan there is a Bowman Collection with materials dating between 1770 and 1837. A description of the collection appears in the Footnotes below. 12

4 Charles Hudson, History of the Town of Lexington, Middlesex County, Massachusetts from Its First Settlement to 1868, Revised and Continued to 1812, Two Volumes, Lexington Historical Society, Houghton Mifflin Company, Boston and New York, 1913. Volume I, History, pp. 427-28; Massachusetts Office of the Secretary of State, Massachusetts Soldiers and Sailors of the Revolutionary War, A Compilation from the Archives, Seventeen volumes, Wright and Potter Printing Company, Boston, 1896, vol. 2, p. 350-51.

The Bowman collection contains financial documents, correspondence, and essays related to the family of Samuel Bowman of Wilkes-Barre, Pennsylvania. Two early receipts, dated 1770 and 1771, pertain to the financial affairs of William Ledlie, Captain Samuel Bowman's father-in-law. Other receipts from the 1790s indicate Bowman's purchase of "twenty Gallons of Whiskey and one Cask," and a transaction involving a horse; one later financial document records an order for schoolbooks in 1809 made by Jacob Morris, a Revolutionary War colonel.

Several legal documents throughout the collection document land holdings of the Bowman family, as well as additional fiscal matters; these include a sworn statement about Ebenezer Bowman's debts (November 10, 1821), a deed for land owned by the estate of Jesse Fell near Wilkes-Barre, Pennsylvania [1831], and a notice of a pending lawsuit against William Ledlie Bowman (February 20, 1837).

The collection also holds personal correspondence, including, among other material, one anonymous, religious letter (May 29, 1797), and an item about local military recruitment efforts (February 4, 1800). Among the additional materials are a celebratory essay written on July 4, 1825; an article about local lawyer Mr. Phillips, addressed to the editor of the Wyoming Herald; and an essay composed "On Nothing."

Samuel supported the National Government during the Whiskey Rebellion and the article on the left refers to his leading troops to sustain the national government against the “whiskey rebels.” The other refers to the unfortunate nature of his demise. One of Samuel’s sons, Alexander Hamilton Bowman, named for Samuel’s old commanding officer, graduated third in his class from West Point in 1825, then taught at the Academy for a year before spending nine years supervising the construction of the fortifications around the harbor in Charleston, SC, including the building of Fort Sumter. He also worked on construction projects at Savannah, GA and superintended the construction of the south wing extension of the U.S. Treasury Building. During the Civil War he supervised the upgrading of the fortification around Boston Harbor, and served as Superintendent at West Point from 1861 to 1864.1