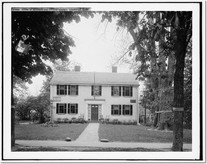 Joseph Comee was one of Captain John Parker’s band of Patriots who stood under arms on the Lexington Common on the 19th of April, 1775. He was born July 1st, 1753 and was just 22 years of age when he along with his fellow militiamen confronted the might of the British Army! Joseph lived all his life in Lexington. His parents had moved to Wrentham in 1771, but he and his brother remained here on their family's small farm on the Woburn line.

On the morning of April 19th as the militia gathered on the green, Captain Parker said “Every man of you who is equipped, follow me; and those of you who are not equipped, go into the meeting-house and furnish yourselves from the magazine, and immediately join the company.” (Based on the deposition of Sylvanus Wood)

Joseph Comee, Caleb Harrington (23 yrs old) and Joshua Simonds (35 yrs old) then went to the Meeting-house, to comply with the Captain's command to get ammunition and was doing so when the Redcoats arrived. Lieutenant Colonel Smith, about the facts of the action, “The troops then near the meetinghouse and dwellings, much enraged at the treatment they had received [during the entire encounter one British soldier had been nicked in the leg] and having been fired on from the houses repeatedly [there were no armed men in any houses, except for the few seconds that it took Joseph Comee to race through Marrett Monroe's house away from the common], were going to break them open to come at those within; though they deserved no favor...I was desirous of putting a stop to all further slaughter of those deluted people, therefore gave orders, and by the assistance of some of the officers prevented any one house being entered.”

Excerpt from the diary of John Adams in Works
Caleb Harrington and Joseph jumped out of a window. Caleb was shot and killed immediately. Joseph ran westward across the common towards Marrett Monroe’s house. Seeing that the British were about to surround the house, Come in attempting to escape amid a shower of balls, was wounded in the arm.
The Marrett and Nathan Monroe House faces the green and was built in 1729

Marrett Munro, whose home Joseph ran through, submitted an estimate of £5 for the bullet damage. In today’s money that would be about $557. The total estimate for damages in Lexington was £2,576 or a little over $287,000 in today’s currency.

Note as written;
December 8, 1775
Petition of Joseph Comee [sic], setting forth “that on the 19th of April last, at the battle of Lexington, was by the enemy wounded in the left arm, having the cords and arteries cut in such a manner as to render his arm entirely useless for more than three months, and has been at great charge in surgery, nursing, and board; therefore prays your Honours may grant him such relief as you may think proper”

In the House of Representatives Resolved, that there be paid out of publick Treasury, to Joseph Comee [sic], the sum of twelve Pounds seven Shillings, in full, for his nursing, boarding, and doctoring, and time lost.
In Council: Read, and concurred.
Joseph Comee never served in the military again!
___________________________
A year later he was dead of unknown causes. Where he buried is also unknown.
Joseph’s father was married around 1751 based on the birth of his twins, Ezra and Mercy. He married a girl name Mary (last name unknown). They had six more children, Joseph born July 1, 1753, Mary in 1755, Aaron 1757, Betty 1760, Ruhama 1762, and the records show Benjamin being baptized July 7, 1765.
Not sure why Aaron was not on the green, I would think he was of age but never shows up on Captain Parker's roster.

On April 19th Capt. Parker had some eighty men on or near the common; this number constituted over one tenth of Lexington’s entire population and half the adult male.
There were some minutemen from other towns who just happen to be there, some had old hunting muskets, some had to go to the meetinghouse to get one belonging to the town of Lexington.
David Hacker Fisher writes: Four Lexington Minutemen were in the meeting house, also known as the town’s powder magazine.

Hudson wrote: Joshua Simonds and three others, had, on the approach of the British, gone into the church to obtain a supply of powder. They had succeeded in getting two quarter casks from the upper loft into the gallery, when the British reached the meeting house. Two of them Caleb Harrington and Joseph Comee, resolved at every hazard to escape from the house and join the company. Harrington was killed in the attempt at the west end of the meeting-house. Comee, finding himself cut off from the company, ran under a shower of balls, one of which struck him in the arm, running to the Monroe house, and passing through house made his escape at the back door. The third (who????) secreted himself in the opposite gallery, while Simonds loaded and cocked his gun, and laying down, placed the muzzle upon the open cask of powder, determined to blow up the British, if they should enter the gallery, choosing to destroy his own life rather than fall into their hands.

Although all three interpretations are similar one question arises who was the fourth person in the meetinghouse? 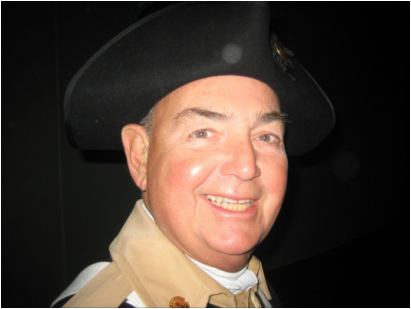 John was inducted into the Minute Men in February 1974
"I've always been a bit of a history buff and there were a bunch of my neighbors who were members. I'd always liked to see the buff and blue marching down the street. It gives a sense of pride in our town," he went on.
He's participated as part of the minutemen in many parades -- Evacuation Day and St. Patrick's Day in Boston, at Presidents Jimmy Carter and Bill Clinton's inaugurations, the ticker tape parade in New York City at the end of the Gulf War. He's been in many opening ceremonies and was part of the Minutemen's planting a tree in Arlington National Cemetery honoring Revolutionary War soldiers. But the events most important to McWeeney are Lexington's Patriots' Day and Veterans Day ceremonies.