Wearing outfits made of polyester, sewing plastic or modern buttons to clothing, wearing 18th century clothing uncommon to the Massachusetts Bay Colony, or simply wearing an outfit without a coat, smock or jacket, actually distorts the historical period and events we cherish so deeply.  Further, by knowingly recreating clothing and equipment incorrectly, we engage in mis- education and do a disservice to American History.

There are several prerequisites to the five-foot rule:

The five foot rule is defined as:

A person will be authentic if the spectator, from a distance of no more than five feet cannot:

3. Identify or observe any 20th century anachronisms, including, but not limited to, modern shoes, modern shoes                 with buckles tied to them, modern glasses and modern wristwatches.

2. Belts with round hand forged buckles from JAS Townsend

14. JAS Townsend belt bags not converted to over the shoulder hunting bags

19. Wearing a smock or frock coat without a workshirt and weskit underneath

21. Modern shoes with buckles tied to the laces

All clothing and equipment must pass inspection. Clothing worn will be properly and well fitted and all visible stitching will be sewn by hand. If you are not absolutely certain of the accuracy and appropriateness of ANY items, please find out before you acquire them. No unapproved clothing or equipment will be allowed. All uniform and equipment items will be changed when changes are necessitated due to new documentation.


Members are encouraged to allow their clothes to age and weather in a manner appropriate to life in the field and/or at work.  Thus, clothes can/should be stained and patched, but patches should be neatly done and in a manner that allows for preservation of clothes.

Absolutely refrain from washing small clothes (shirt and trousers) with bleach or modern heavy detergents. This will degrade the fibres and wash out their natural color.


The following are applicable to those portraying male militia men. The proper fit of clothing is paramount. See Appendix A for a discussion of this topic.


Hats: Hats must be round blocked and constructed of wool or fur felt. Acceptable styles include civilian cocked hats, flop hats, round hats, and partially cocked hats. Hats must be black, tan, grey or brown in color.1
Dress Uniform hats are prohibited.


Caps: Caps must conform to period examples. Acceptable styles include Monmouth caps, French caps, and workman‟s caps. They must be made of wool or linen and be of appropriate colours (striped Monmouth caps are permitted).2 Highland bonnets and voyageur caps are BANNED.


Workshirt:  Shirts must be appropriate to the mid 18th century. The collar should be no more than two and three quarter inches high and must close with one to two buttons. Wristbands should not exceed one inch in width. The neck opening should extend no more than nine inches down the chest. Acceptable materials for shirts include tow, linen, flannel, or light weight wool in white, natural, striped, or checked colors. Buttons must be made of bone, pewter, wood or natural or bleached linen thread. Wrists may be closed with thread buttons or with sleeve buttons.3


Neck Clothes/Rollers: Should be made of linen, linen/cotton blend, or silk and be cut triangular or square. Solid, checked, spotted, or striped colors are acceptable. They must be tied and knotted under the collar.


Waistcoat:  Must be made out of wool or linen.  Must conform to 1750s, 1760s and 1770s examples.  The 1750's style must extend to between mid-thigh and knee, and have 8 to 10 buttons down the front. Functional or false welt pockets should be located at waist level, and be covered by flaps with or without buttons and buttonholes.  The 17660/1770s style should extend below the waist to the hip and have 10 buttons down the front. “Roundabout” waistcoats are also permitted.  Pockets may be either functional or false welt or flap covered pockets. Waistcoats can be made of materials of a contrasting color and texture to the coat and breeches.  Buttons should be pewter, brass, horn, or cloth/thread covered.4

Under Jackets: Under jackets, or sleeved waistcoats, should fit close to the body and in the sleeves. They may be made of wool, linen, and linsey-woolsey. Solid and striped colours are acceptable. Buttons may be pewter, brass, horn, or cloth-covered.5

Farmer’s/Waggoner’s Smock:  Should be slightly larger than a body shirt and constructed of medium weight linen or lighter weight wool. These can be worn over body shirt and waistcoat or act as an extra work shirt. The length of the smock should be at least at the knee. Thigh and waist length smocks are mid to late war styles and are prohibited. Button arrangement should be the same as for work shirts. Natural, striped, solid, or checked colors are acceptable.6 Work Shirts are not to be used in place of a coat or jacket. They are for fatigue duty only.  A lightweight cotton, osnaburg or linen work shirt from JAS Townsend is not an acceptable substitute for a smock.

Frock Coats: Frock coats are the most common outer garment for men regardless of class. They should be made of wool or linen. The frock coat, always worn over a waistcoat, could be of the same color and fabric as the waistcoat, or more commonly, as noted in ads concerning run-away servants or slaves, of quite different fabrics and colors altogether. The linings of frock coats were often of a complementary shade, with some being quite bold in pattern and bright in color. They may have a falling collar or no collar and either round or slashed cuffs. Acceptable colours

Bounty Coat:  A bounty would have been issued to Lexington men serving at the Siege of Boston with Captain John Wood‟s Company, Colonel Baldwin‟s Regiment in October, 1775. The coat was a tobacco brown laborer‟s jacket and would be cut much like a sleeved waistcoat with a collar and cuffs.  The buttons, stamped with the regimental number “38”, would generally be larger than 5/8-inch diameter and, therefore, spaced further apart. The bounty coat would have

pockets and pocket flaps without buttons on the flaps.  Acceptable material is wool.8   Bounty

coats cannot be worn at events recreating an engagement prior to October 1, 1775.

Jackets:  Jackets, or workman‟s coats, should extend no lower than mid thigh. They may be cut “roundabout” the waist if desired. Double breasted jackets are permitted. All jackets should be close fitting in the sleeves. They should have round or slashed cuffs and rolled or fall down

6 Cain, “A Frock and Trowsers, Spade and Hoe, Will Do For My Remaining Days: An Analysis of the Use of Farmer‟s Smocks by Massachusetts Militia on April 19, 1775,” New England Rev War Campaigners, 2008.


collars. Pockets are optional but, if included, should be flap or welt style. Jackets should be made out of wool, linen, linsey-woolsey, or similar materials. Acceptable colors include blue, brown, red, and striped. Buttons should be pewter, brass, horn, or cloth-covered.9

Great Coats: Great coats must be made of wool, have a collar and at least one circular shoulder cape sewn into the coat. Cuffs should not have buttons and must be long enough that they may be turned down over the hands. The coats should have six to eight buttons down the front.

Pockets are optional but if included should be flap covered and without buttons. Buttons may be silver, steel, pewter, brass, horn, wooden, or cloth-covered. Appropriate colors include blue, shades of brown, shades of gray, red, and black.10

Breeches: Breeches must conform to period examples. They must be fall front style and should fit closely about the legs. They should be made out of leather, wool, linen, or fustian. Breeches may be solid, striped, or checked in pattern and colour.  The most common colours for wool breeches were blue, black, brown, and “light.” Other colours are also acceptable. Ties, buckles, or buttons may secure the knee-bands. Acceptable buttons include pewter, brass, horn, wooden, or cloth-covered.11   White canvas breeches are prohibited.

Trousers: Must be fall front style, above the ankle in length, fit relatively close above the knee, have a baggy rear seat, and adjustable ties in the rear. Trousers may be solid, striped, or checked in pattern and colour. Fabrics may include wool, linen, linsey-woolsey, or fustian. Buttons should be pewter, brass, horn, wooden, or cloth-covered.

Stockings: Stockings must come up over the knee and be wool, linen, or cotton. Colours may be white, gray, navy, black, mixed, or brown. Horizontal striped stockings are prohibited.  Tube or athletic socks are prohibited.  Stockings should be held up by garters made of leather (with period correct buckles) or worsted wool tape (with or without buckles).12

Gaiters or Half/Farmer's Boot: These should be made out of linen canvas or wool in black or brown. They should close with pewter or horn buttons, and extend about eight to ten inches above the ankle. Gaiters should be tight fitting and not sag. They must cover the laces or buckles of your shoes. Military style high (full) gaiters or Indian leggings are not appropriate for the civilian militia impression.

10 Dickfoss, “Greatcoats of Runaways Advertised in Rhode Island and Pennsylvania,” The Brigade Dispatch: The Journal of the Brigade Of The American Revolution 33, No. 2, (Summer, 2003). Also see Cooke, “Keeping Out the

Advertised in Rhode Island,” The Brigade Dispatch: The Journal of the Brigade Of The American Revolution 35, No. 4, (Winter, 2005).


Footwear: Should be plain, mid 18th century style leather shoes. Leather may be black or brown, smooth or rough side out. They should be closed with buckles (brass or steel) or laces. 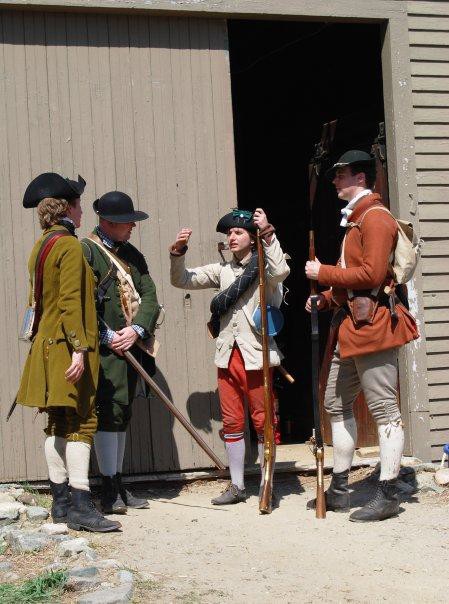 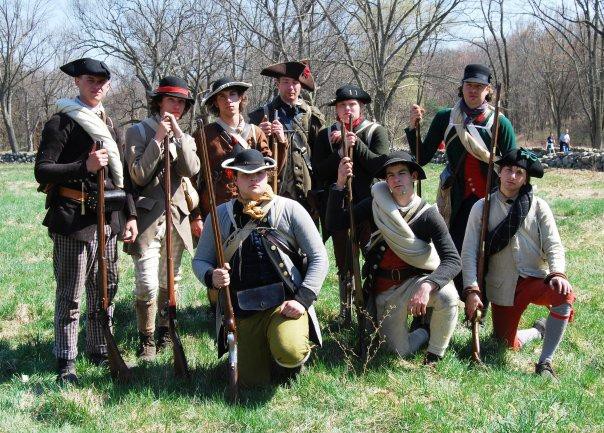 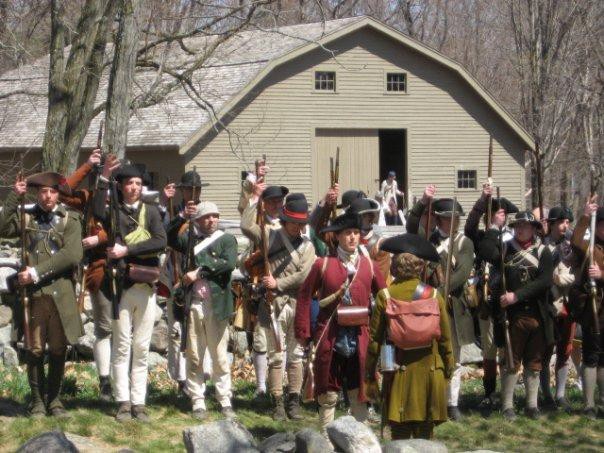 An assortment of militiamen wearing breeches, trousers, coats and jackets. Note how the jackets and breeches are tight yet not restricted