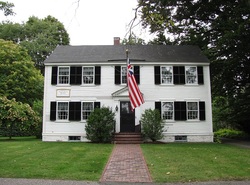 Nathan Munroe was a member of the extensive Munroe clan that descended from the immigrant ancestor William Munroe 1st, who according to family tradition was captured along with three other Munroes at the Battle of Worcester in 1651. They were marched to London and sentenced to be transported to America. The four were assigned to Thomas Kemble of Boston and sent on board the ship John and Sarah arriving in Boston in 1652. The manifest of the John and Sarah was badly damaged and while the names Robert, Hugh and John Munroe remain legible the fourth does not but it is believed that this was William Munroe.  William’s indenture was purchased by millwright John Adams from the area of Cambridge, MA known as Menotomy. Later William would work for Joseph Cooke of Cambridge from whom he also rented land.1

For thirteen years, he remained single, eventually marrying Martha George in 1666. Martha and William had four children before she died sometime prior to 1672 when William married twenty-year-old Mary Ball. Mary had experienced a troubled life. She had been employed by Michael Bacon a married man from Bedford, MA with whom Mary fell in love, became pregnant at age eighteen. She was abandoned by her lover and deserted by those who had formerly supported her during her pregnancy.  With Michael’s encouragement and assistance, she fled to Rhode Island to her uncle’s home where Michael promised to join here. However, he had no plan to do so, refused to answer her pleas for help and was eventually hauled into court and forced to provide for the child he had fathered.2

The only people who had any sympathy with her plight were Martha and William Munroe who took her into their home sometime in 1671. Shortly thereafter Martha died and in 1672 William married Mary. For the next twenty years Mary presented William with a child every two years, dying in 1692 at the age of forty-one.3 With William’s four children by his first wife, Martha, and ten with Mary he had fathered a total of fourteen children. William settled in the Northeastern part of Cambridge Farms, MA, now Lexington, and there he and his sons purchased a good deal of property. With his children settled around him the area took on a definite Munroe flavor to the extent that it soon became known as “Scotland.” William married again Mrs. Elizabeth Johnson Dwyer a widow of a Scots tailor from Charlestown She died December 14, 1714.4  William died January 23, 1717/18,  surviving three wives, however, it is William and Mary who lie side-by-side in Lexington’s Old Burying Ground.5

John Munroe (born March 10, 1666 died September 14, 1754) was William’s oldest child by his first wife Martha. John served as Assessor in 1699, 1714 and 1700; Constable in 1700; Selectman in 1718-19, and 1726; and Treasurer in 1718-20. Charles Hudson in his History of Lexington writes that, “He, with others, had 900 acres of land granted to them in 1735 for service rendered in the Indian fight at Lamprey River, 6 June 1690.”6 This refers to an encounter in King William’s War between Native Americans and two companies of Massachusetts Militia commanded by Captains Noah Wiswall and John Floyd on the shore of Wheelwright’s Pond located today in Lee, New Hampshire. The battle resulted in the death of three militia officers, including Captain Wiswall, and twelve privates and the wounding of nine others.  The engagement is referred to as either the Battle at Wheelwrights Pond or Lamprey River.7

John married Hannah Marrett (born August 17, 1668 Cambridge, MA; died April 14, 1716). They had ten children the last of whom was Marrett, born December 16, 1713. Hannah’s tombstone is in Lexington’s Old Burying Ground, but John’s apparently is not.8 Marrett served as a Selectman in 1762, 63, 64, and 67. He married April 17, 1737 Deliverance Parker, sister to Captain John Parker. Deliverance was born May 28, 1721 and died August 9, 1799. Marrett and Deliverance had twelve children, the fifth of whom was Nathan, the subject of this essay, born August 9, 1747. Marrett and Deliverance’s graves are apparently not in Lexington’s Old Burying Ground. 9

Nathan was married on October 3, 1769 to Elizabeth Harrington (born April 11, 1750 died December 24, 1812), sister to Jonathan Harrington killed April 19, 1775 on the Common. Nathan and Elizabeth would have ten children, and he was already a father of two when he stood on Lexington Common on April 19, 1775, where he was joined by six other Munroes.10 Nathan was one of only eight of the Lexington Militia credited with firing back at the Regulars.

The Seven Members of the Munroe Family Who Mustered on Lexington Common April 19, 1775

Nathan served under Captain Parker’s command five days May 6 to 10 at Cambridge, and again under Captain Parker for two days June 17 and 18 also at Cambridge both times as a Private. Charles Hudson has a Nathaniel Munroe serving “in the Seventh Campaign to White Plains in September 1776.” His next service was in Captain John Moore’s Company, Colonel Jonathan Reed’s Regiment of guards from April 1, 1778 to July 8, 1778, 3 months and 2 days at Cambridge guarding the men of General John Burgoyne’s “Convention Army,” who had been surrendered the previous October at Saratoga. His last tour of duty was in Captain Abraham Andrews’ Company of Colonel Cyprian Howe’s Regiment from July 27, 1780 to October 30, 1780 “service 3 mos. 7 days, regiment detached from Middlesex Co. militia to reinforce Continental Army for 3 months, no rank given.11  Nathan died May 26, 1829 at age 81 years, 8 months and 17 days. At present the gravesites of Nathan and Elizabeth are unknown.

1James Phinney Munroe, “A Sketch of the Munro Clan also of William Munro who, deported from Scotland, settled in Lexington, Massachusetts, and of some of his Posterity, Together With A Letter From Sarah Munroe to Mary Mason Descriptive of the Visit of President Washington to Lexington in 1789,” George H. Ellis, Printer, Boston, 1900, pp. 19 – 26; Alexander Mackenzie, History of the Munros of Fowlis with Genealogies of the Principal Families of the Name: To Which Are Added Those of Lexington and New England, A. W. Mackenzie, Inverness, 1898, pp. 559 - 563.


Copyright 2018 © The Lexington Minute Men under a Creative Commons license with additional exceptions.