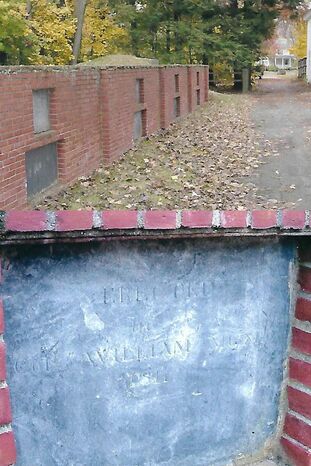 
‘When the British troops had arrived within about a hundred rods of the meetinghouse, as I was afterwards told by a prisoner, which we took, they heard our drum, and supposing it to be a challenge, they were ordered to load their muskets, and to move at double quick time.’

-A portion of the deposition given by William Munro March 7, 1825

How peculiar the 80-year-old William Munroe must have felt on April 19th 1822 as he celebrated with a beverage at the local tavern with twenty survivors of the original Lexington Militia which made history that same day in 1775.  Forty-seven years to the day Munroe and his comrades may have done the first re-enactment of the Battle of Lexington while attracting hundreds of spectators to the event.  While playing the late Captain John Parker, Munroe faced a group of ‘British re-enactors’ commanded by Col. Benjamin Wellington who uttered the words ‘Disperse ye rebels and ye will not be harmed’.  As part of the event it was arranged that a man should run from the meetinghouse and fall dead as in the original battle; but jokingly he was criticized because his recovery from death was……too fast!

Here sat ‘Will’ Munroe who had seen his generation establish a new nation with a new concept in governing its citizens and survive another war in 1812.   Munroe was a man who had given much service to his country first as the orderly sergeant in Parker’s Company and then a brief stint of duty in Cambridge during May and June of ’75.  Enlisting as a private, Munroe would later become a 1st Lieutenant in Captain John Bridge’s 3rd Middlesex Company.  During Shay’s Rebellion in 1786-1787 Munroe would ride with the rank of Colonel in the Massachusetts Militia.

After the War for Independence there would be service to the Town of Lexington as a Selectman and later as a Representative to the Massachusetts General Court.  There would also be a stint as a Freemason, founding member, and first Master of Hiram Lodge in 1808 originally meeting at his tavern.  Masonic documents exist today in Arlington, MA showing the signatures of Munroe and many other familiar names from the original Company roster.

Financially, Will was a simple Tavern keeper who nonetheless would amass a sum of real estate and personal assets of over $1700 as early as 1796 making him one of the wealthiest men in Lexington.  The Munroe Tavern was a going concern welcoming many livestock drovers over the years as they traveled to Boston from as far away as New Hampshire and beyond.  There would be many a cold New England night where the weary and hungry traveler might feast and drink heartily by the warm fires the Tavern provided.

William married Anna Smith who bore him William jr., Anna, Sarah, Lucinda, Jonas, and Edmund.   Anna would succumb in 1781 from an unknown cause.  A second marriage to Mary Rogers (or Polly as she was often called) gave him a feisty and strong-willed partner who would help him run the Tavern for many years.  It was Mary who lavishly entertained in grand fashion the newly elected President George Washington who visited Massachusetts (and Lexington) in the fall of 1789.

As the muffled conversations and laughter amplified in the tavern of 1822, Will tried to recall the face of his older brother Edmund.  A professional soldier, Edmund went off to fight gallantly in the French & Indian War with distinction.   A few years later Will stood with Edmund that fateful day in Lexington as all hell would break loose on the Common.  Later, the Munroe family would grieve after learning of Edmund’s untimely death from a British artillery shell at Monmouth in 1778.

Of Munroe’s children not much is known of the girls, however Will’s sons would encounter various success and hardship.  William jr. would become a merchant in Boston but later was killed in Richmond Virginia as a result of a stagecoach mishap.   Jonas would run the Tavern for many years until the stagecoach trade would dry up due in part to the introduction of the railroads.  ‘Uncle Jonas’ as he was affectionately called would later drown while swimming in the nearby town of Somerville.  Edmund founded the New England Glass Company, which would later be bought by Mr. W.L. Libbey who would move the company to Toledo, Ohio.  Libbey Glass survives and prospers to this day.

A lifetime had passed for Will as he welled up and thought selfishly of his own mortality.  The new country for which he had fought and later contributed to for these many years was beginning to flex its muscle as a North American power.   Could the original survivors that April day in 1822 comprehend the United States becoming a world power during the beginnings of the next century?

Will sat back and reflected on the day’s events, the re-enactment, the cheering spectators and how the ‘embattled farmers’ all shook hands with the ‘Kings Troops’ when it was done.  The comfort and closeness of Will’s old friends and family made him feel good and brought a smile to his face as he signaled to the tavern keeper for another beverage.  Yes, Will thought, he had as productive and interesting a life as a man could ask for.

Old Will lived another five years all the while weaving stories of his experiences from those first days of our independence.   Finally in 1827 the old orderly sergeant would join the rest of his compatriots who had gone before him, that small band of Parker’s Company.