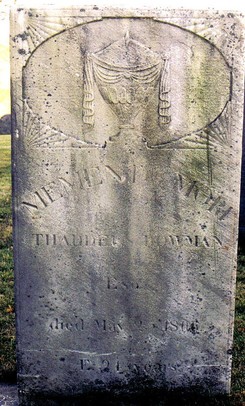 Captain Thaddeus Bowman was the mounted scout who brought the report to Captain Parker on the morning of April 19, 1775 that the column of the King’s troops was actually already within the town limits and approaching rapidly.

Thaddeus had been one of the last scouts sent out to discover whether or not the Redcoats were actually on their way to Lexington. He rode at a rapid pace down the Cambridge Road (today’s Massachusetts Avenue), and had proceeded only about a mile and a half when his horse stopped suddenly and refused to go forward despite being urged on by his rider. Thaddeus wondered what had frightened the animal. Then, peering ahead he discovered the reason when he spotted two individuals, one on each side of the road, close to the fences. He was still unsuccessfully endeavoring to urge his horse forward, not being aware of the plans of these soldiers, for that is what they were, to capture him. Then he caught a glimpse of the main body of the British troops as he described it “about twenty rods or about one hundred yards off.”1 He instantly turned his horse about and quickly rode back to the meeting-house where he informed Captain Parker of the approach of the Regulars. Norman Chic Daigle, who for many years portrayed Thaddeus, and who is himself quite an accomplished horseman, maintains that it was Thaddeus’s horse who exhibited the most intelligence that day, and credit should be given to it for the timely warning having being carried to the Lexington militia.

Thaddeus Bowman was the great grandson of Nathaniel Bowman who was born in England in 1608; it is said either in the town of Kirkoswald near Carlisle in County Cumbria (formerly Cumberland) Wales or Leek, Staffordshire.2 He came to the Massachusetts Bay Colony probably in 1630 in the Winthrop Fleet reputedly on board the ship Mary and John which landed in Plymouth.3 He settled initially in Watertown and was one of the first incorporators of that town. In 1635 he purchased 200 acres from Samuel Goff in the southwestern part of Cambridge Farms called Rocky Meadow and moved there about 1649-50. His home was near today’s Watertown Street in Lexington, near the Arlington and Belmont. He died January 21, 1682.4

Nathaniel had six children, the first of whom was his son, Francis, born about 1630 probably in Watertown. Francis married Martha Sherman on September 26, 1661. They had ten children and Francis died in Watertown on December 16, 1687 and Martha on February 25, 1728-29. Francis’s epitaph is among those that appear in the Old Burying Ground in Watertown.5 The sixth child and fourth son of Francis and Martha was Joseph born May 18, 1674. He married Phoebe Barnard of Watertown in 1694. They settled in Cambridge Farms and when the area was incorporated as the Town of Lexington in 1713, Joseph then served as town clerk, assessor, as selectman for fifteen years, as representative to the Great and General Court for six years and as Justice of the Peace. Joseph and Phoebe had nine children the seventh of whom was Thaddeus born September 2, 1712.6

“To Corporal John Parker. You are hereby required to warn all the training soldiers of your squadron belonging to the Military foot company under my command to appear at the house of Mr. John Raymond in this town on Saturday, the [illegible] day of November by nine of the clock in the morning, precisely with arms complete hereof fail not, sir [?] return this warrant with your doing therin [sic] on or before the day perfecd [sic].

As tensions arose between the Colonies and the Mother Country, Thaddeus was also among those who took a leading part in voicing opposition to the actions of Parliament. On October 21, 1765 he and his fellow selectmen were asked to determine what instructions should be given to the town’s representatives to the Great and General Court with respect to the Stamp Act.10 Again, on December 31, 1772, he was chosen as one of a committee of seven to draft instructions to the town’s representatives to the General Court with regard to “the proposal to make the Supreme Judges independent of the people by giving them a salary directly by Parliament.”11 In addition, at a meeting held January 5, 1772, Thaddeus was chosen as one of the five members of the town’s Committee of Correspondence to communicate with its counterpart committee in Boston “as well as the Committees of other Towns Upon Matters of Common Concern as occasion may require.”12

In 1774, when the towns in Massachusetts were advised by the Massachusetts Committee of Safety to reconstitute their militias and elect new officers, Thaddeus, the last commissioned captain of the Lexington Company and his subordinate officers probably considered themselves superseded, and it was perhaps then that John Parker was chosen to lead Lexington’s militia. Despite the fact that he would be sixty-two years old when he volunteered to scout for Captain Parker on April 19, 1775, Thaddeus obviously did not consider his ability to serve had come to an end. Fortunately Thaddeus and his horse accomplished their mission well.

Thaddeus married twice and his wives bore him thirteen children, seven of whom survived to adulthood, six sons and one daughter. All six of the sons served in the Revolutionary War. Captain Samuel Bowman, according to family tradition, was a member of Alexander Hamilton’s staff and “was with Major John Andre the night before his execution,” and in fact “commanded the guard which conducted Andre to the gallows.”13  Another son, Major Joseph Bowman, commanded a battalion at the Battle of Bennington and served in the Saratoga campaign.14 The Major had moved to New Braintree, Massachusetts around 1765, where his son, Joseph Jr., was born in 1771. Joseph, Jr. became one of New Braintree’s more successful citizens. He represented the town in the General Court for fourteen years, was a Senator, member of the Governor’s Council and for twenty-one years served as President of the Hampshire Manufacturer’s Bank.15

So, what does that have to do with Captain Thaddeus? Well, at the time of the battle as we have noted Thaddeus was already 62 years old and one of only five men over the age of sixty in the entire Lexington Company. However, like many a Revolutionary War veteran this hero of the battle fell on hard times in his old age. It is sad to read the 8th Article in the warrant reported out of the March, 1804 Lexington Town Meeting asking “to see if the Town will order the Selectmen to call upon Joseph Bowman, Jun. to support his grandparents viz. Capt. Thaddeus Bowman and his wife.”16 Then on April 2nd at the town meeting “it was voted that the Selectmen shall call on Joseph Bowman, Jun. of New Brantry [sic] to support his grandparents.”17

The elderly couple obviously did not have any relatives remaining in town who could care for them and thus the town was forced to either pay for their care or find some relative who would. This was to become such a common occurrence with Revolutionary War veterans that the 1830 and 1840 Census Forms had columns for veterans asking whether they were being supported at public or private charge and whether they were “Insane or Idiots,” suggesting that many were suffering not just the physical weaknesses of old age but also the mental challenges posed by aging. Thaddeus’s story, however, apparently had somewhat of a happy ending. Joseph Jr. must have responded to the request of the town and brought his grandfather and step-grandmother Sybil (Roper) (Woolson) Bowman to live with or near to him in New Braintree, for Captain Thaddeus died there on May 26, 1806 at the age of ninety-six and is buried in the Congregational Church graveyard.18  Apparently, his wife Sybil is not buried there, and sadly we do not yet know where she rests.