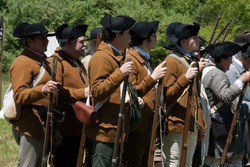 The Lexington Training Band is composed of Lexington Minute Men members dedicated to accurately portraying the men of the Lexington militia as they appeared on April 18th and 19th, 1775.

Despite popular belief, the Village of Lexington on the eve of the American Revolution did not have a minute man company. Instead, the men from that town were enlisted in a single militia company known as "The Training Band".

The term training band can be traced back to the reign of England’s Edward I, when parliament enacted legislation decreeing that every freeman between the ages of 15 and 60 years was to be available to preserve the peace within his own county or shire. When Lexington established its militia, it retained the ancient English title of training band.

Massachusetts militia companies, on the eve of the American Revolution, lacked a uniform supply of weapons and equipment. Everything the men possessed was their own property and thus, the typical militia, like the one before you today, had a varied assortment of accouterments and weapons.

The flintlock musket was the weapon of the era and under the 1764 Crown Manual, a soldier would follow thirteen motions to load it. A British authority writing on the military muskets of the period indicated that it was an inaccurate weapon and only had an effective range of approximately eighty yards.

On the evening before the Battle of Lexington, Lieutenant Benjamin Tidd assembled a portion of the band on the village green to drill in preparation for the inevitable conflict. On October 29, 1774, the Massachusetts Provincial Congress ordered that "it be recommended to the inhabitants of this Province that in order to their perfecting themselves in the Military Art, they proceed in the method ordered by his Majesty in the year 1764, it being, in the opinion of this Congress, best calculated for appearance and defense."

The Training Band performs this drill. The purpose of this drill was to compensate for the limitations of the inaccurate muskets of the time. Men were concentrated in close ranks, shoulder to shoulder, to fire in unison and only upon command and to reload as rapidly as possible. With bayonets fixed, the attacking force would advance to the beat of a drum until they reached a point of eighty yards away from their enemy.

After a volley, the force would advance to fifty yards. A second and perhaps a third volley would be fired. At the moment of impact, the attacking force turned to the bayonet. In this manner of warfare, rate of fire became more valuable than accuracy; speed and precision had to be combined with iron discipline, factors necessary for the soldiers to continue loading and firing despite casualties around them.

The Training Band demonstrates methods of field maneuvers utilized during the American Revolution.

The Lexington Training Band is a member of the Continental Line organization and follows the published safety guidelines for the use of Black Powder of that organization in all events where we participate.