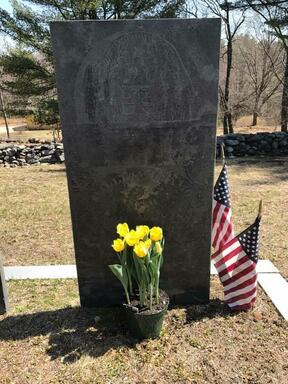 William Diamond was the drummer of Captain John Parker’s Company who sounded the alarm summoning the members of the Lexington militia to the Common on April 19, 1775. At the time William was working as an apprentice wheelwright to Thomas Fessenden who at least according to the Massachusetts Tax Evaluation List for 1771 was one of the ten wealthiest men in Lexington.

It is frequently cited that William was born in Boston on July 21, 1758 and was thus only sixteen when he drummed the militia onto Lexington Common. However, the inscription on his gravestone and his application for a military pension indicate that he was born in 1755 and was thus nearly nineteen on April 19, 1775.1 He served several tours of duty with the Continental Army the first in Captain Edmund Bemis’s Company of Colonel Asa Whitcomb’s Regiment from April 25, 1775 through at least November 1775 and perhaps until the end of the year when the Massachusetts troops were enlisted into the Continental Army in January, 1776. Thereafter, his name appears on the roster of Captain John Wood’s Company of Colonel Loammi Baldwin’s 26th Massachusetts Regiment in which he served throughout the siege of Boston, in the New York Campaign of 1776 and at the Battle of Trenton in December of that year. He was one of the brave few who responded to General Washington’s appeal and agreed to serve an extra six weeks from December 31, 1776 and thus he would have participated in the Battle of Trenton. William’s wages for these periods of service were paid to Thomas Fessenden to whom he had been apprenticed as a wheelwright. Fessenden may have been receiving the money in lieu of Williams’s labor which he was still owed if William’s apprenticeship contract was still in force, or perhaps holding the funds for him until he returned, a practice that was not that unusual. 2

William probably mustered out along with many others of the 26th Regiment when his additional six weeks was up in mid-February 1777. Subsequently, he enlisted for two months in Captain Jesse Wyman’s Company of Colonel Josiah Whitney’s Regiment serving in Rhode Island from May to July, 1777.3 Soldiers and Sailors next entry for him has him joining for six months from March 10 to December 19, 1780, and his final enlistment was from September 8 to December 5, 1781 in Captain John Hayward’s Company, Colonel Joseph Webb’s Regiment. His age is listed as 25, again evidence that he was born in 1755.4

Following his last enlistment, William returned to Lexington where he worked as a wheelwright. Perhaps he continued with Thomas Fessenden, in which case he would have perhaps lived as a member of the Fessenden family on Massachusetts Avenue in East Lexington close to the Great Meadows. Or, he may have worked and lived with Bezaleel Lawrence out on the Bedford Road not far from the Bedford town line. Following his apprenticeship, William then apparently attempted to follow the advice that most financial advisors would suggest today. He married ― up. In fact he married into one of the wealthiest families in Lexington ― the Simonds, when in 1783 he took as his wife, Rebecca the daughter of John Simonds and grand-daughter of Jonathan Simonds whose homestead alone, according to Charles Hudson, “contained two hundred and two acres and his estate upon his death was valued at £3,252.”5 In today’s money that would probably be worth close to ten million dollars.6 William and Rebecca had six children five of whom were born in Lexington and the sixth in Peterborough, NH to where the family moved in 1795.

In Peterborough, William worked as a tenant laborer for three years and then in 1798 purchased 60 acres of “wild land” for $200 that he borrowed from his brother-in-law. For the next eight years he was employed as a farm laborer and wheelwright as he worked to convert his sixty acres into a farm capable of supporting his family. By 1806 he was listed on the town tax records as a husbandman and was assisted on the farm by his two sons, William Jr. age twenty-one and John, age sixteen. William, however, remained at the bottom third of Peterborough’s taxpayers, and in 1817 at the age of sixty-two he divided his farm equally between his two unmarried sons who agreed by legal contract to support their mother and father in exchange for deeds to the property. The titles, however, were not formally registered in William Jr. and John’s names for another four and eleven years respectively “possibly to ensure compliance.”8

In 1818, at age 63 William applied for a pension recently voted by Congress for Revolutionary War veterans.  In his application William claimed he owned no real estate, possessed $42 worth of livestock (2 cows, 3 sheep 1 hog) and paid $6 annually for a lifetime lease to thirty-two acres of land. He owed to “different persons $50 or more.” His occupation was given as “farmer, but unable to labor.” His household, he reported, consisted of his wife, aged fifty-eight, and his daughter Lydia Avery, age twenty-three with two children. According to William’s affidavit, “Her husband has no property and has absconded,” that is he had abandoned his wife and children.9 The pension William received of $96 annually helped to save the family. William Jr. was able to buy land, and John and his family to share the home with his parents, his sister and her children. However, they remained at the bottom portion of Peterborough’s taxpayers, and when William died in 1828 at the age of seventy-three his estate of $163.43 (a little over $3,000 today) was reduced to just $3.97 after his debts and obligations were paid.10 His widow, Rebecca, continued to receive a widow’s pension until she died April 8, 1855.11 William and Rebecca are buried in the Old Burial Ground in Peterborough.12 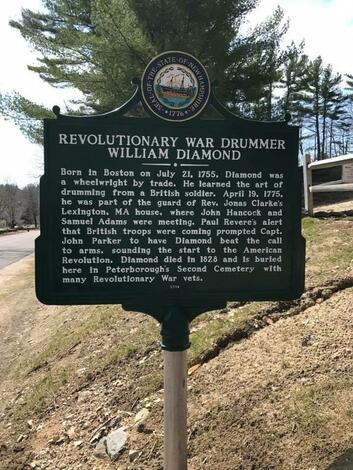